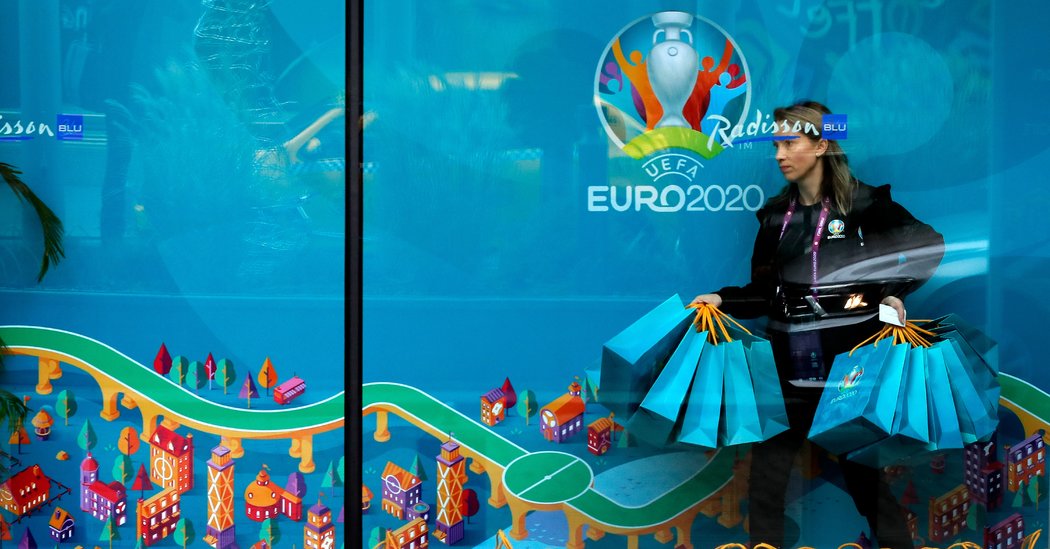 European soccer’s governing body, UEFA, posted a message on its Twitter account on Friday evening with a seemingly innocuous update: Its European Championship — another sporting casualty of the coronavirus outbreak — would still be known as Euro 2020, even though it has been postponed until 2021.

Within minutes, however, the tweet was deleted and replaced by a message saying it had been sent in error.

The inadvertent message underscored how organizers are grappling with the myriad complexities of rescheduling a tournament that stands just behind the Summer Olympics soccer competition and FIFA’s World Cup as one of sport’s most-watched events. This year’s tournament was billed as the biggest Euros yet, and for the first time it was to be a Pan-European spectacular, with the games spread across the length and breadth of the continent, instead of in just one or two host countries, to celebrate its 60th anniversary.

But when UEFA announced last week that it was postponing the tournament, which was set to start on June 12, by a year, it raised an important question for sponsors and commercial partners: Would it still be called Euro 2020, even in 2021?

Even before a final decision to postpone the Euros had been announced, the organization was preparing for the possibility, including on the branding front. A week before the announcement, lawyers for UEFA had registered the trademark Euro 2021 with patent offices for the European Union, Britain and the United States.

But with the event so close, planning had been completed, tickets were close to being issued and, just as crucial, millions of items of merchandise with the Euro 2020 branding were ready to hit the shops. A Euro 2020 video game from Konami was just a month away from its release. Promotions by Heineken and Coca-Cola had been approved, and Adidas had started to produce its anniversary ball.

Coca-Cola, a longtime partner of UEFA, had started shipping its first Euro 2020-branded packages to some markets two weeks before the tournament was postponed, and a promotion with the maker of the tournament’s popular sticker books was underway in Switzerland.

While a final decision has not been made, several of UEFA’s commercial partners prefer the tournament to keep the Euro 2020 name, according to people familiar with the matter who requested anonymity to discuss private deliberations. Such a move would be similar to one announced by the International Olympic Committee this week when it announced that the Olympic Games postponed until next year would retain the name Tokyo 2020.

Some Euro 2020 merchandise is already on shelves, making it a collectible for this unexpected moment, in which a mystery virus has brought sports to a halt. The popular collector cards and sticker albums for the tournament, produced by the Italian company Panini, for instance, are on sale.

Tim Crow, a sports marketing consultant based in Britain whose past clients include Coca-Cola and BMW, said retaining the 2020 branding would be “infinitely preferable” than having to rename it for UEFA’s many partners.

“Anybody who has done it knows that registering any kind of trademark and licensing is a very expensive and time-consuming exercise,” Crow said. “To rip all that up and start again because you’ve postponed an event is one of the things you don’t necessarily have to do.”

A spokeswoman for Coca-Cola said: “We look forward to working with UEFA to create a successful event next year, and would appreciate the decision to continue the use of the Euro 2020 marks to minimize impact to materials that were already created.”

While some of UEFA’s sponsorship contracts run for many years and cover other events in its portfolio, some are specifically for the European Championship and were set to terminate this year. Those, according to the people familiar with the matter, are now likely to be extended for another year. UEFA’s contracts with broadcasters already have a provision for a case in which the tournament is postponed for up to 13 months.

UEFA’s legal department, which, like much of Europe, is working from home, is poring over agreements and working to find a solution to a problem that until the last two months had not been envisaged by anyone involved.

Guy-Laurent Epstein, UEFA’s marketing director, declined to comment on the specifics of the organization’s conversations with its partners. But he said no final decision had been made about the name for the tournament, and added that all the stakeholders involved would have to “share the pain.”

“We are assessing the overall picture and taking all the arguments into consideration,” he said.

Konami, the video game maker, had planned to release its Euro 2020 game on April 30. Producing it required months of work creating licensing agreements with all of UEFA’s 55 national associations, as well as UEFA itself, and companies that manufacture the jerseys, like Adidas and Nike. A plan had also been in place to include the Adidas-produced tournament ball as well as special version for the final.

For companies that make physical, branded items, the pause could not have come at a worse time. Some were on the cusp of executing plans that had been hatched as long as 18 months ago, and beverage companies like Coke and Heineken would not only have worked on branding and promotion but also on shelving requirements for their customers, like major supermarkets.

“As a longstanding UEFA partner, we fully support the decision to postpone Euro 2020 until the summer of 2021 and will work with UEFA on future plans,” Heineken said in a statement.

Tournament-specific merchandise, like the millions of key chains, balls and T-shirts that were going to hit the shelves in the next weeks, will now most likely have to be stored in warehouses.

But all the campaigns and merchandise may not be able to be simply rolled out as originally designed after the hiatus. Whenever soccer does return and the tournament can be played, it is clear that it will be in a different environment than when it was abruptly halted. Tournament hosts and sponsors, Crow said, will probably want to take into account the shock much of the world has endured.

“I think you might see some sponsors wanting to rethink their campaigns,” he said.