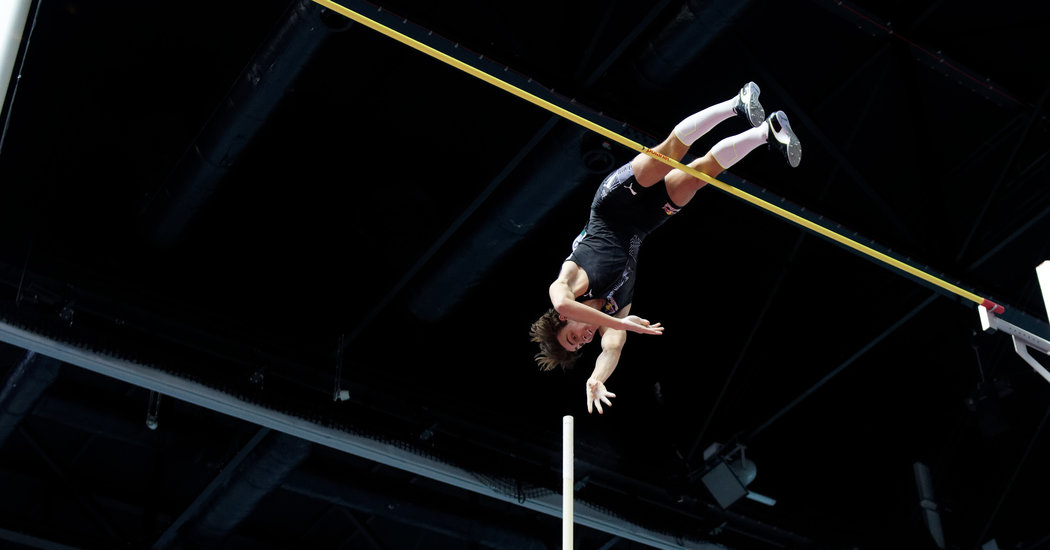 Armand Duplantis, a 20-year-old Louisiana native who has been as shrewd in choosing the nation he represents as he has been in choosing his fiberglass poles, broke the world record in the pole vault on Saturday with a jump of 20 feet 2.9 inches, or 6.17 meters.

At an indoor meet in Torun, Poland, Duplantis edged by a centimeter the previous record set in 2014 by Renaud Lavillenie of France, the 2012 Olympic champion.

Duplantis, known widely as Mondo, has already been selected to compete at the Tokyo Games, where he will be a favorite to win gold. But he will wear the blue and gold uniform of Sweden, his mother’s home country, instead of the red, white and blue of the United States.

Among other things, Duplantis’s decision is a cunning bit of strategy.

If he had sought to represent the United States at the Olympics, Duplantis would have had to finish among the top three vaulters at the Olympic track and field trials in June. One bad day, trouble with his technique or adverse weather conditions would present the risk of having to wait another four years to compete in the Summer Games.

Sweden, along with many countries, has a more forgiving Olympic selection process that is not determined by a single trials performance.

A number of top American vaulters have been left heartbroken by a disappointing performance at the trials. Famously, the decathlete Dan O’Brien, who was an Olympic gold-medal favorite in 1992, failed to qualify for the 10-event discipline at the Barcelona Games when he could not clear a height in the pole vault at the Olympic trials in New Orleans. O’Brien recovered to win the gold medal in 1996.

Duplantis, who is from a family of elite athletes, all of whom attended Louisiana State University, spent his boyhood summers in his mother’s native Sweden, competing for a track and field club there. His mother, Helena, was a heptathlete and volleyball player at L.S.U.

A vaulting phenom from the age of 7 with dual citizenship, Duplantis had to choose which country to represent in international competitions. In part, he was swayed by wanting to follow in his mother’s footsteps. But he also understood the risks of trying to qualify for the Olympics for the United States with its trials format.

“I can’t say that wasn’t in the back of my mind,” Greg Duplantis, Mondo’s father and coach, said on Saturday in a telephone interview from Lafayette, La. “Every time, there’s a disaster or someone comes up that no one knows about.”

Greg Duplantis, who was an All-American pole-vaulter at L.S.U., said most people he had encountered had been fine with Mondo’s decision, though “you get a few disgruntled people.”

“I’m expecting some backlash for the Olympics,” he said. “I don’t quite get it. He’s following in his mom’s footsteps. There shouldn’t be anything wrong with that.”

Sam Kendricks of Oxford, Miss., the 2016 Olympic bronze medalist and a two-time world champion, told The New York Times in 2017 that Mondo Duplantis’s decision was a “very professional way of looking at it.”

“I know a lot of people are going to say, ‘Why don’t you compete for the United States?’” Kendricks said. “But that’s not the point of it for him. The point is to jump high and elevate the sport.”

On Saturday, Duplantis told the website of track’s world governing body that the record was “something that I wanted since I was 3 years old. It’s a big year, but it’s a good way to start it.”