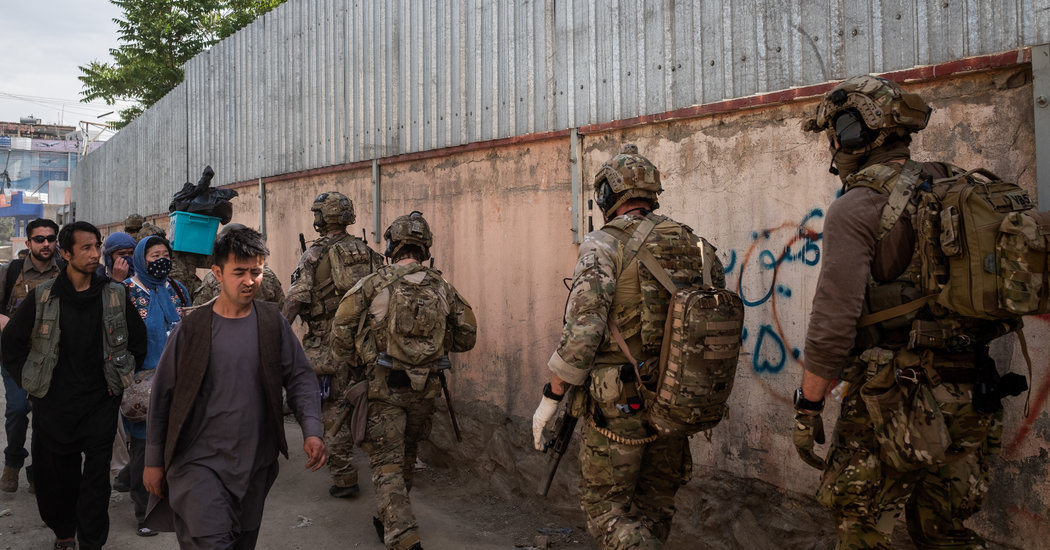 A memo produced in recent days by the office of the nation’s top intelligence official acknowledged that the C.I.A. and top counterterrorism officials have assessed that Russia appears to have offered bounties to kill American and coalition troops in Afghanistan, but emphasized uncertainties and gaps in evidence, according to three officials.

The memo is said to contain no new information, and both its timing and its stressing of doubts suggested that it was intended to bolster the Trump administration’s attempts to justify its inaction on the months-old assessment, the officials said. Some former national security officials said the account of the memo indicated that politics may have influenced its production.

The National Intelligence Council, which reports to the director of national intelligence, John Ratcliffe, produced the two-and-a-half page document, a so-called sense of the community memorandum. Dated July 1, it appears to have been commissioned after The New York Times reported on June 26 that intelligence officials had assessed months ago that Russia had offered bounties, but the White House had yet to authorize a response.

The memo said that the C.I.A. and the National Counterterrorism Center had assessed with medium confidence — meaning credibly sourced and plausible, but falling short of near certainty — that a unit of the Russian military intelligence service, known as the G.R.U., offered the bounties, according to two of the officials briefed on its contents.

But other parts of the intelligence community — including the National Security Agency, which favors electronic surveillance intelligence — said they did not have information to support that conclusion at the same level, therefore expressing lower confidence in the conclusion, according to the two officials. A third official familiar with the memo did not describe the precise confidence levels, but also said the C.I.A.’s was higher than other agencies.

A spokeswoman for Mr. Ratcliffe’s office declined to comment. The officials familiar with the memo described it on the condition of anonymity.

It is not uncommon for the intelligence council to produce short-notice, all-source assessments on important topics, especially if agencies’ analyses differ, said Gregory F. Treverton, the chairman of the council from 2014 to 2017. But he voiced concern that the assessment of the suspected Russian bounty program could be politicized to fit the White House’s characterization of the intelligence about it.

“I would hope the process still maintains its integrity, but I have real concerns, given the pressures these analysts are under,” Mr. Treverton said in a telephone interview.

Matthew G. Olsen, a former director of the National Counterterrorism Center who also held other national security posts during both the George W. Bush and Obama administrations, also said the account of the memo’s contents raised the appearance of potential politicization.

“These products are never definitive, ever — there’s always caveats and holes and judgments and qualifications,” Mr. Olsen said. “The White House has portrayed it as not verified, but it’s never verified, so that struck me as misrepresentation. It would be very easy, if you want to take a different spin, to draw those out and amplify the ways it’s inconclusive.”

Mr. Ratcliffe, formerly a Republican congressman known for his outspoken support for Mr. Trump, was confirmed in late May.

The memo is said to lay out the intelligence that informed the agencies’ conclusions. It declared that the intelligence community knows that Russian military intelligence officers met with leaders of a Taliban-linked criminal network and that money was transferred from a G.R.U. account to the network. After lower-level members of that network were captured, they told interrogators that the Russians were paying bounties to encourage the killings of coalition troops, including Americans.

But, the two officials who discussed the memo in greater detail said, it stressed that the government lacks direct evidence of what the criminal network leaders and G.R.U. officials said at face-to-face meetings so it cannot say with any greater certainty that Russia specifically offered bounties in return for killings of Western soldiers.

Two suspected leaders of the criminal ring who were believed to have met with the G.R.U. — Rahmatullah Azizi, a onetime drug smuggler who grew wealthy as a middleman for the Russian spies, and a second man named Habib Muradi, according to three officials — fled to Russia after raids this year where several of their underlings were captured.

The memo also emphasized that the National Security Agency did not have surveillance that confirmed what the captured detainees told interrogators about bounties, according to the officials. The agency did intercept data of financial transfers that provide circumstantial support for the detainees’ account, but the agency does not have explicit evidence that the money was bounty payments.

The memo also said that the Defense Intelligence Agency did not have information directly connecting the suspected operation to the Kremlin, officials said. But earlier assessments had also said that it was not clear how far up in the Russian government the bounties were approved. Intelligence officials suspect that a G.R.U. section known as Unit 29155, which has been linked to assassination attempts and other covert operations in Europe intended to destabilize the West or exact revenge on turncoats, is behind the suspected plot.

The memo was produced as the administration, in response to bipartisan congressional demands, delivered briefings to lawmakers this week. Another person familiar with one of the briefings said that lawmakers were told that the intelligence community had high confidence that Russia was encouraging Taliban attacks on American and coalition forces and that the G.R.U. had officers in Afghanistan with links to the Taliban.

But, the person said, while there was chatter among Afghans about possible bounties for attacks, American officials were less sure when it came to trying to link Russians to the acts of specific Taliban militants or associated criminal units, or showing that the Russians had actually paid for specific attacks. At one point, about half a million dollars in cash was seized in a raid on a compound, raising suspicions, but investigators could not say for sure that it was bounty money.

The briefers told Congress that it was not clear whether the Russians were behind or paid for one episode that investigators are said to be focused on: the killing of three Marines in an April 2019 bombing outside Bagram Air Base. One official said the new memo said that it cannot be established with certainty that Russian actions led to that attack.

The United States has accused Russia of providing support like small arms to the Taliban for years. After interagency vetting, the intelligence assessment that Russia’s support had escalated into directly encouraging more attacks on Americans and other coalition troops was included in Mr. Trump’s written daily brief in late February, officials have said.

The assessment of the problem also served as the basis of an interagency meeting in late March convened by the National Security Council, at the end of which officials were assigned to come up with a menu of potential responses. The ensuing list started with making a diplomatic complaint to Russia and escalated into sanctions and other punishments, officials have said.

But despite receiving that list months ago, the Trump White House has not authorized action. The administration appeared to have indefinitely sidelined the issue, the officials said, until The Times article last week caused an uproar in Congress, prompting a fresh look at it.

Realme C11 to Go on Sale in India Today via Flipkart, Realme.com

Realme C11 is set to go on sale in India today. The budget-friendly device will be available for purchase via