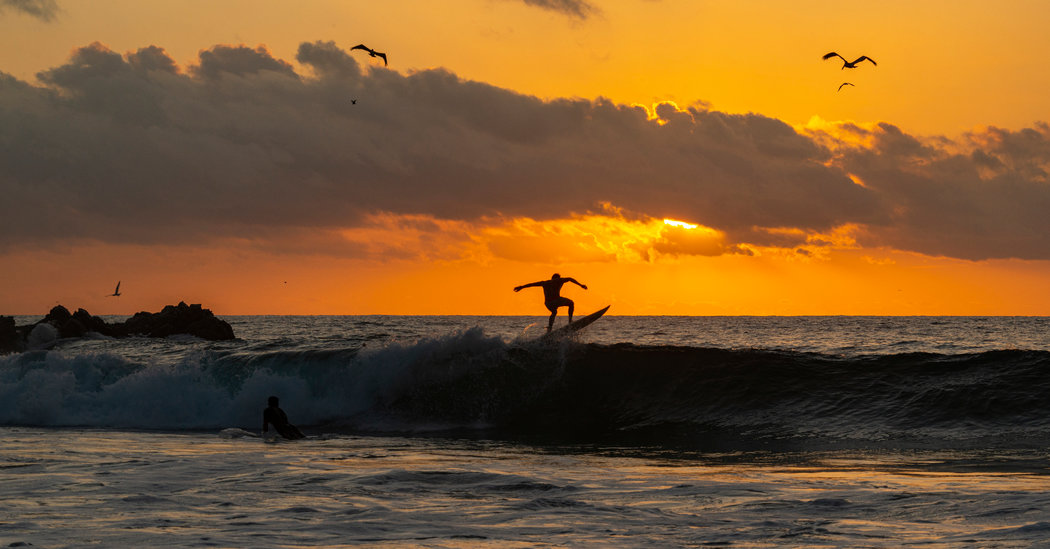 It was my final day in Zicatela and I wanted to make the most of it. So, despite an aversion to tours, I signed up for an evening trip to the bioluminescent Manialtepec lagoon. For 350 pesos (about $17), me and five other travelers were chauffeured to the lagoon, where we were introduced to our captain and his crew, a father and his grade-school-age son. They wrestled the small skiff through a tangle of overlapping lines, pulling it to the narrow dock. The water was glassy, and the air, at nearly 8 p.m., was balmy and motionless. I was buzzed from my after-dinner mezcal and the rush of easy adventure.

I’d been warned that the moon, one day shy of full, might drown out the bioluminescence. But when the captain instructed us to dip our hands over the side, we left comet-like trails through the warm, black, brackish water as thousands of tiny aquatic organisms defended themselves with light. When we stopped, I lifted my dress over my head and threw myself overboard, my arms and legs turning the water blue and gray as the water became alive.

On to Zipolite: “Welcome, naughty friends”

The next day, I shared a taxi with German backpackers, dropping them in the little hippie town of Mazunte before continuing to Casa Sol Zipolite, a boutique hotel by the founders of Mexico City’s Red Tree House, a favorite from my childless days. (It, like Casa Sol, doesn’t allow kids.) I’d been a fan of the couple behind the hotel, Craig and Jorge, for years, so when the pair bought a former nudist resort on this remote stretch of Oaxacan coast, I was curious.

Zipolite is known for its openly nude beach, one of the few in Mexico, and the week I arrived was a particularly amusing moment for a first visit. A convention of swingers — mostly older Americans — had descended on the tiny pueblo. The hotel next door had a sign out front, “Welcome, naughty friends,” which became a running joke among the guys at Casa Sol.

Every night, Ernesto, Craig’s and Jorge’s right-hand man and the soul of Casa Sol, hosts a happy hour for guests, who gather for margaritas and conversation. During my stay, the place — which often has reservations a year in advance — was uncharacteristically quiet. It was just me and two couples. After drinks, I tagged along with one of them, Renée and Matt, from Vancouver. Around my age, they’d offered to help me find my way from Casa Sol’s cliffside perch in the dark.

I took Ernesto’s advice and hopped a cab to Mazunte’s Pizzeria. The area around Zipolite is overrun with Italian restaurants, so in the spirit of “If you can’t beat em, join em,” I found a seat at an outdoor table beside a blazing pizza oven and beneath string lights. The place seemed to be run almost entirely by kids, including a teenage girl who manned the kitchen, rolling dough with an empty Corona bottle and baking beautifully charred, Neapolitan-style pizza. A boy who looked no older than 14 was the pizzeria’s lone server and covered the tables like a seasoned professional.

At the long table beside me, there was a group that I imagined were foreign exchange students on vacation. I struck up a conversation with one of them, a young woman from London. She was there, she said, “working on her trauma” — likely a guest at one of several spiritual and healing centers in the area. She mentioned that there was a “jam session” at a bar around the corner and invited me to join. I’d had just enough wine to agree.