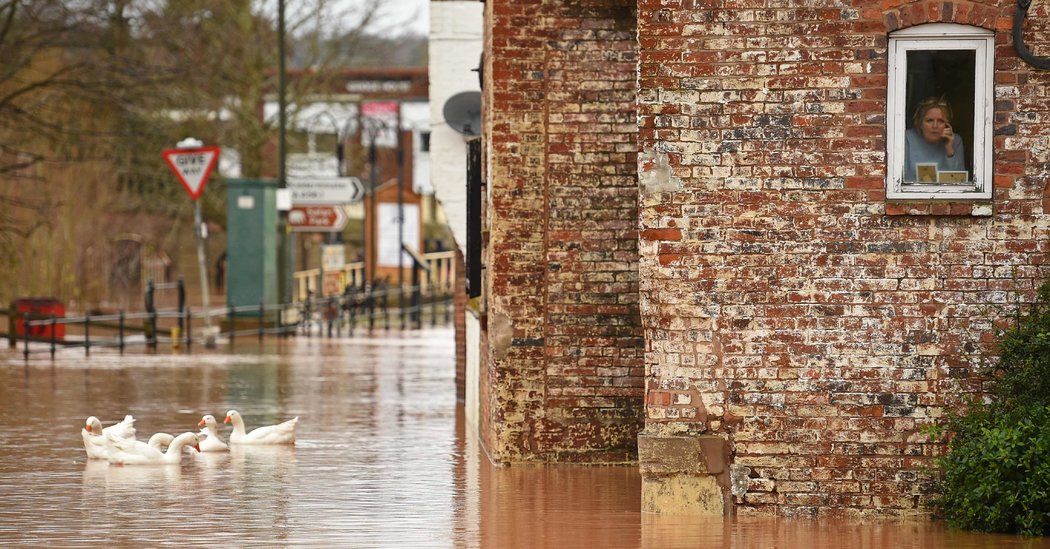 LONDON — Britain has been battered by severe weather for the second consecutive weekend, prompting an official warning on Sunday that lives were at risk as streets became flooded, rail tracks submerged and dozens of flights canceled.

The storm, named Dennis and classified as a “weather bomb” by the national weather service, the Meteorological Office, unleashed wind gusts of 91 miles per hour, becoming one of the most intense winter storms to grip the North Atlantic. The term weather bomb is applied when the air pressure of a storm drops by a certain measure in 24 hours, causing huge turbulence and high wind speeds.

The impact on the ground brought chaos to parts of England, Wales and Scotland, with more than half a month’s worth of rain falling in one day. In addition, the body of a teenager was pulled from the sea during the storm, and a man died after he apparently fell overboard from a ship moored off the coast. On Sunday, the police in Wales said another man had lost his life after falling into a river.

The extreme weather slammed areas that were still recovering from last week’s storm, Ciara. That storm, called Sabine in German-speaking countries, tore through Belgium, Britain, France, Germany and Poland with winds of more than 90 miles per hour. It left at least five people dead and forced the cancellation of hundreds of flights, train services and sports matches.

At least 170 flights were canceled on Sunday, a weekend that is especially busy in Britain because of a weeklong school vacation. A red warning for parts of Wales early Sunday expired around 11 a.m., but most of Britain remained under an amber alert, the second-highest warning after red.

Also on Sunday, about 320 flood warnings were issued across the country, including in South Wales, where fast-flowing or deep floodwater caused by the storm posed a risk to life, the Met Office said. It added that 109.4 millimeters of rain (about 4.3 inches) had already fallen in Tredegar, a town in southeast Wales, since 4 a.m. Friday.

“We are urging people to follow the safety advice from officials and to keep a close eye on the latest Met Office weather warnings,” said Andy Page, the chief meteorologist at the Met Office.

At Nantgarw, a village in South Wales, vehicles were left submerged and families had to be rescued by emergency workers.

Sarah Bridge, 55, who lives in South Herefordshire, close to England’s border with Wales, told the BBC that she and her neighbors were shocked by the ferocity of the weather.

“Storm Dennis came like a tornado,” she said. “It hit us very badly Saturday evening.” She said added that it had burst through flood doors installed after a previous episode.

In West Yorkshire, in the north of England, soldiers were readying flood defenses and preparing to step in if the waters rose and stranded residents.

In Western Scotland, people were advised not to travel, and the severe weather forced ferry services to be canceled.

“If you are out, take extreme caution and never drive or walk through floodwaters,” he said.

Last year, residents of Whaley Bridge, a small town in northern England, were ordered to evacuate after a dam on a 19th-century reservoir that looms above their homes was seriously damaged by heavy downpours.

As the pandemic bore down, Saudi Arabia, which has poured tens of billions of dollars into the war to little

At Drive-in Disco, It ‘Feels like Saturday Again,’ Even Without a Dance Floor