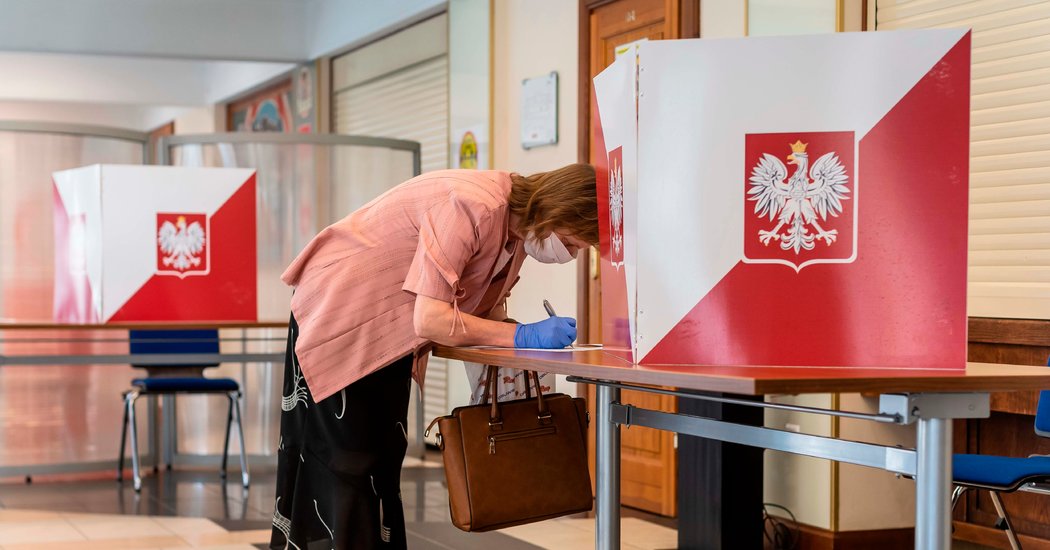 
Voters must bring their own pens. Masks are required for anyone entering a polling station in Warsaw and other Polish cities. Doors should remain open so people do not have to touch the handles. And voters will be given a zone of personal space three feet in all directions.

These are just a few of the measures that have been put in place in Poland to ensure people can safely vote in Europe’s first presidential election since the coronavirus pandemic swept across the continent.

The election was delayed from May and polls last week suggested that no clear winner was likely to emerge with more than 50 percent of the vote, which would force a runoff election in two weeks.

Nearly a dozen candidates representing a wide range of views, from the far right to the ultraliberal, are running. The main challenger to President Andrzej Duda, who was elected in 2015 and held a commanding lead in the polls before the delay, is Rafal Trzaskowski, Warsaw’s mayor.

In many ways, the election is a referendum on the governing Law and Justice party, which swept to power in 2015 and set about an ambitious agenda to reshape the state. For opponents of the government, the governing party represents a fundamental threat to democracy and has set the country on a course already charted in Hungary, where single-party control has allowed a steady drift to autocratic rule.

Law and Justice party leaders and Mr. Duda have framed the election as a struggle over the soul of the nation, singling out the L.G.B.T. community with the kind of vitriol that was directed at migrants five years ago, when immigration helped fuel the rise of populist leaders across the continent.

But even as old divisions defined much of the debate before the election, it played out against the very different backdrop of a pandemic.

Poland was one of the first nations to close its borders, and when it locked down in March, it did so completely. Military police were even dispatched to the streets to make sure people did not break the rules.

It was also one of the first nations in Europe to ease coronavirus restrictions, and on May 20, the mandatory order to wear masks in public was lifted. Just about everything that was open before the pandemic is open, including gyms, restaurants and movie theaters.

With just 285 new cases reported on Friday, the reopening has not yet led to major spikes in new infections. So far, there have been over 33,000 confirmed cases and 1,429 total deaths.

But the one restriction that remains is on large gatherings of over 150 people.

And elections, by their nature, are large gatherings.

On Friday night, in the Old Town Square outside the Royal Castle that once housed Poland’s monarchs and was rebuilt brick by brick after being destroyed in World War II, several hundred people gathered to hear Mr. Trzaskowski’s final campaign speech.

“If we lose it’s going to be dreadful,” said one supporter, Agata Rzeszewska. “Democracy is going to end.”

Magda Szczawińska worried that the governing party might use the pandemic to challenge the results if it loses.

“I’m very much worried,” she said. She feared the government would declare a state of emergency to delay a runoff election to buy time if it looks like it will lose.

“The pandemic is an element of the political game in Poland,” she said.

The election is widely viewed as one of the most important in the history of this young democracy, which held its first, partially free elections in 1989.

It has been an often bitter campaign, with the governing party turning to cultural issues to rally its loyalists. Mr. Duda has likened homosexuality to communist ideology and only eased off his harsh rhetoric after widespread international condemnation.

Mr. Duda is not technically a member of the governing Law and Justice party, but has the support of the party’s founder and chairman, Jaroslaw Kaczynski.

In fact, though, the Polish president has had a hard time escaping from the shadow of Mr. Kaczynski, the most powerful politician in Poland and the architect of the government’s agenda.

Mr. Kaczynski was often frustrated by court rulings when his party led the country from 2005 to 2007. Since returning to power in 2015, he has moved to undo what he sees as the mistakes of the early years of Polish democracy.

Legal experts from the European Commission have found that many of these changes have posed a threat to judicial fairness and undermined democratic values.

The fight over the courts is just one in a series of pitched battles with the European Union. Mr. Kaczynski has often cast those battles as fights for Polish sovereignty.

“Poland is and should remain an island of freedom,” Mr. Kaczynski said at a meeting of the party’s youth convention on Wednesday, the same day Mr. Duda was visiting President Trump in Washington. “If today President Andrzej Duda is in the United States holding talks about Polish-American relations, including in the military sphere, he is fighting for freedom, Polish freedom.”

Polish voters overwhelmingly like being in the E.U., however, and Mr. Trzaskowski has made repairing that relationship a key part of his platform

In Poland, election officials said that the logistics of socially distanced voting were challenging but manageable.

Voters should be given a zone of personal space, roughly three feet in every direction. And the stations must be aired before voting begins and at least once every hour for 10 minutes.

The traditional green tablecloths will not be used so surfaces can be easily cleaned.

“Surfaces such as door handles, ballot boxes, table tops, handles, light switches, etc. that may be touched by people inside the polling station will be cleaned with the disinfectant liquid before the commission starts work,” according to the guidelines. And then, they must be wiped down once an hour and at least six times on Election Day.

Russia and China vetoed a last-ditch attempt on Friday by Western members of the U.N. Security Council to extend approval

Long-Planned and Bigger Than Thought: Strike on Iran’s Nuclear Program