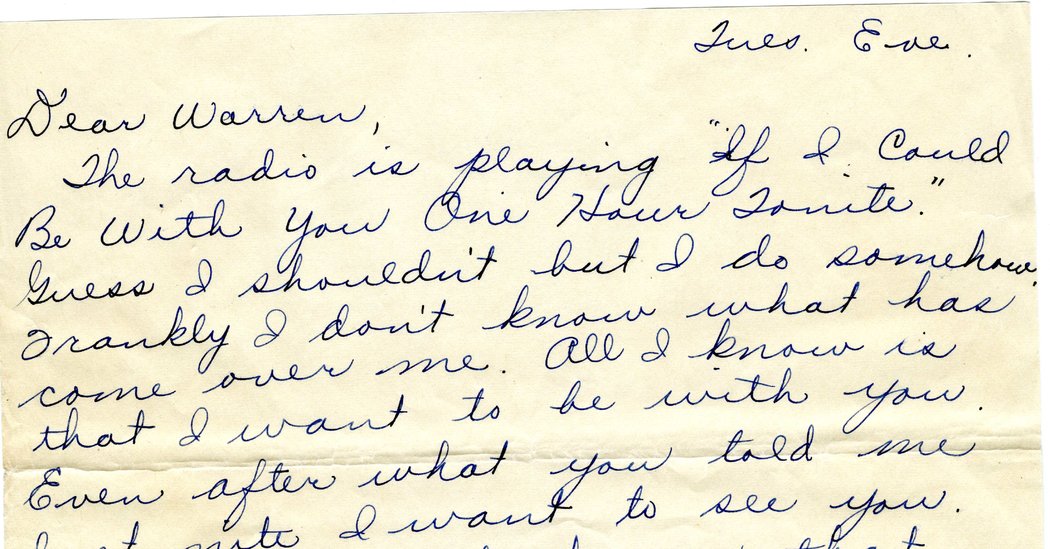 They met in Boston around Christmas in 1943, sang and played guitar at her house and shared a kiss he said he would never forget.

By 1944, Leslie L. Upcraft, an Englishman, was aboard the H.M.S. Cubitt, serving the British Royal Navy while his girlfriend, Barbara Russo, a high schooler who dreamed of becoming a pilot, stayed behind in her native Boston.

For a year, he wrote her passionate letters that promised marriage and undying love.

“If only we could be together soon dear, I’d give anything to be back to you,” he wrote her in December 1944. “I’m so sure that I am coming back to you after the terrible war is over.”

Alas, he did not.

Mr. Upcraft would later learn from his friends that his American girlfriend had become engaged to someone else during the war, according to letters Ms. Russo received from his family. Mr. Upcraft eventually married another woman.

But their intense, epistolary love affair is captured permanently in a vast collection of similar letters at the National WWII Museum in New Orleans. As the 75th anniversary of the end of World War II approaches, the museum is highlighting thousands of love letters from soldiers and sailors to their wives and girlfriends. The letters by Mr. Upcraft are among many collections staff members are digitizing so they can be more accessible and be read online around the world. (The museum does not have letters Ms. Russo wrote.)

Toni Kiser, the museum’s assistant director for collections management, said the missives show how the unpredictability and horror of war compelled people to gush about their feelings, forsaking fears of rejection or humiliation. They’re also poignant reminders of how letter writing was once as ubiquitous as emailing and texting, if more romantic.

“I was really struck with how passionately and how often young men then wrote to their girlfriends,” Ms. Kiser said. “When I gave a lecture about this, I said, ‘Men, these days. You’ve got to step it up.’”

Love letters from the war have been found in secondhand shops, by house clearing companies and on eBay, where they are priced as high as $500.

Through the families of World War II veterans, the museum collected the letters to sweethearts, family members and friends. The museum has other artifacts, including old recipes for how to bake during a sugar ration and wedding dresses made of parachutes.

Silk was also rationed at the time, Ms. Kiser said. Japan made most of the world’s silk and the war cut off its import into the United States, making the material extremely rare. Soldiers who came across parachutes made of silk would grab them off battlefields and ship them home, where they were often sewed into dresses, she said.

The effort to collect letters from veterans began about 20 years ago and since then, the museum has received thousands of pieces of mail professing true love and pangs of loneliness and desperation.

One letter dated simply “Tues. Eve” from a woman named Pat to Second Lt. W. Dale Brown of the Army Air Corps is marked by despair.

“The radio is playing ‘If I Could Be With You One Hour Tonight,’” she starts. “Frankly I don’t know what has come over me. All I know is that I want to be with you. Even after what you told me last night I want to see you.”

She would write him a dozen letters filled with similar sentiments.

She was not his only pen pal, according to Ms. Kiser.

Mr. Brown’s family submitted a collection of dozens of letters that included pained correspondence from at least four women. They asked why he hadn’t written, why he didn’t call or tell them he had been transferred, or why he had not come to see them while he was on furlough, Ms. Kiser said.

Eventually the letters from Pat stopped.

“I’m guessing she got wise to him,” Ms. Kiser said.

The museum even has breakup letters, the majority of which were from women, Ms. Kiser said.

What doomed the relationship between Mr. Upcraft and Ms. Russo is unclear.

In December 1944, he wrote her another letter on the first anniversary of their first meeting.

“My mind is made up to come back for you,” Mr. Upcraft wrote. “I would be very happy darling if you were my wife. This is an anniversary proposal, Barbara. Please say yes!”

Her answer is a mystery, because the museum does not have the letters Mr. Upcraft received from her.

He later wrote her some Christmas cards, but soon after that she stopped receiving letters, according to museum officials.

Then, he learned she had become engaged to someone else.

His mother wrote Ms. Russo in April 1945 expressing confusion that she didn’t tell him personally and that he had to learn of the engagement from his friends.

Mr. Upcraft’s letters were donated to the museum more than 12 years ago by Ms. Russo’s family. Museum officials were unable to find current contact information for them.

Ms. Kiser said she could not help but speculate that Ms. Russo still had feelings for Mr. Upcraft.

“She must still have had a strong connection to him and the letters to keep them for 70 years,” she said.