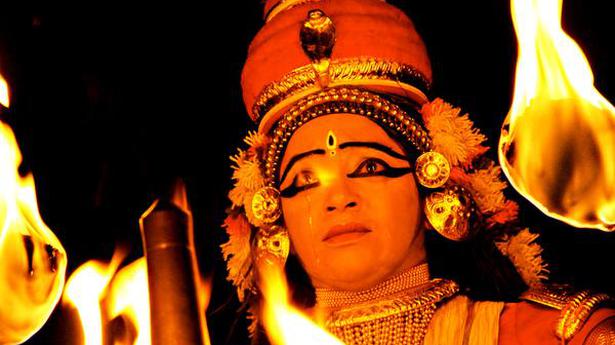 Ranga Shankara, which is celebrating its 15th anniversary this year, is hosting special performances every month including presentation of rare art forms. “We have one special theatrical experience every month, and these few showcase the full range of an art form,” says S Surendranath, the Artistic Director of Ranga Shankara.

On January 26, Ranga Shankara brings a Kutiyattam performance — one of India’s oldest living theatrical traditions and the only one to use ancient Sanskrit plays, states Surendranath. “Kutiyattam is practised in Kerala and rarely seen in Bengaluru,” he adds.

Kutiyattam exponent G Venu of Natanakairali from Kerala will direct and present Urubhangam (The broken thigh) an original by the playwright Bhasa. A visual and aural spectacle, a Kutiyattam performance has actors in exquisite costumes performing in the light of a large lamp that burns bright through out the performance.

“Special rhythm instruments that are specific to the genre such as mizhavu and idakka accompany the actors. The best among Kutiyattam and mizhavu exponents from Natanakairali are part of Urubhangam,” says Venu, who is looking forward to presenting the show to Bangaloreans. “Pothiyil Ranjith Chakyar (as Balarama), Sooraj Nambiar (as Duryodhana), Kapila Venu (as Gandhari) and Ammannur Rajaneesh Chakyar (as Ashwatthama) are in the cast. Rajeev, Hariharan and Narayanan Nambiar, all artistes from Kalamandalam will be on mizhavu, where as Kalanilayam Unnikrishnan will play the Idakka and Kalanilayam Haridas will be in charge of the elaborate make-up of the artistes,” he adds.

Speaking about the presentation, Surendranath says, written in 4th Century AD, Urubhangam is probably the first ever anti-war play of India. It is a true classic narrative that delineates the after-effects of war and simultaneously brings in the pain a person goes through. “Urubhangam is a coming together of a rich and traditional classical form.”

About its artistic, intellectual and social relevance, Venu says, among all Bhasa’s plays, Urubhangam has an eternal relevance cutting across centuries. “The hero is Duryodhana, usually regarded as the anti-hero, or the villain in all the traditional renderings of the Mahabharata. Not just that, the play maintains a unique objective perspective while approaching the epic battle that practically criticises the whole exercise,” he says.

The team analysed and studied the storyline of Urubhangam as part of the repertoire of Kutiyattam in the olden days. “During our research to produce this play on the stage, we read the text over and over again. Many possibilities and perspectives emerged as we burrowed into the insights available. The team of Abhinaya Kalari of Natanakairali, prepared the Attapraprakaram by deciding to present the whole play through just four characters, namely Balarama, Duryodhana, Gandhari and Aswathama.”

Urubhangam in Kutiyattam, by Natanakairali will be staged in Ranga Shankara on January 26 at 7.30 pm. Tickets available at the venue and bookmyshow.com