An elephant-headed man in a suit. Maharajas riding flying fish. Alexander Gorlizki’s art — which uses Indian miniature painting to depict whimsical, yet contemporary interpretations of everyday things — often gets a double take. But with his latest exhibition at Gallery Ark in Vadodara, the Brooklyn-based artist is looking beyond the picture frames. “I thought about how you can move art away from the wall, almost dripping out of the painting and starting to take over the space around,” Gorlizki, 53, tells me over the phone, in the midst of moving his pieces from his Jaipur studio to Vadodara. Experimenting with forms through furniture and fabric, Otherworldly Interiors explores the personal and protean meanings of ordinary objects. It is “a play on domestic settings in a dream-like way, but that also [hints at] dreaming inwardly”.

Incongruity in the everyday

Some of the pieces on display include wallpapers born out of Mughal miniatures — “I’ve taken leaves, waves and other elements to develop patterns around them” — and hammers painted with animal prints. “They are functional objects,” he explains, “but they sort of lose their function because they become hyper-decorated.” Gorlizki explores this tension by elevating objects with the suggestion of a story. Take, for instance, the earthenware pots he collected from around Jaipur. By transposing his designs on to the simple form, he creates a slightly incongruous object (the colour scheme of one pot is inspired by American artist Sol LeWitt’s vibrant minimalist art). “Some pieces look like they may have come from another planet. There’s a sense of ‘What are they? Were they ritual objects?’.”

Not finding their craft lucrative, he sees a re-imagining of the skill and its visual vocabulary as the key to bringing vitality back to the art form. “Hopefully, it honours and keeps the tradition going,” he says. 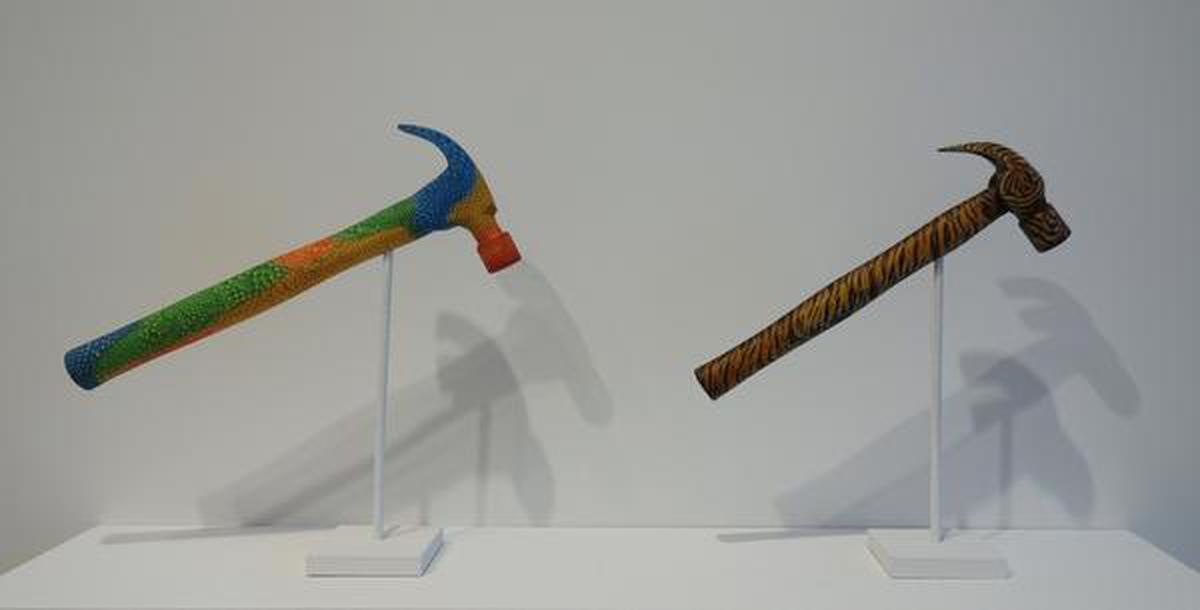 Ironically, he stresses that what he is doing is not particularly original. “It is not important to me if something is original or not; what is important is that it is worth looking at and gives something to people to dream about or ponder.” His vocabulary is inspired by artists like Louise Bourgeois, the French-American feminist whose hard-to-peg works toed the line between surrealism and abstract expressionism; Marcel Broodthaers, the Belgian poet-turned-artist whose surrealist oeuvre has humorous undercurrents; and Austrian Franz West’s playful conceptual art. But he also finds jali work, Islamic geometric patterns and Victorian lace-making just as visually arresting.

He felt that the market, often informed by tourism, encouraged replication of subjects and ideas, and within that context, he began experimenting with form and developing his imagery through the skill of trained miniaturists. “There is so much talent here. The idea was to find ways of experiencing that and maybe redirecting it in a slightly different way,” he says, describing his work as “watching children play” — the way new elements are incorporated to build games. “It has to do with mental agility and going on an adventure, and Otherworldly Interiors is just that, a launchpad to somewhere else,” he concludes.

Otherworldly Interiors is on at Gallery Ark, Vadodara, till March 7. Details: theark.in