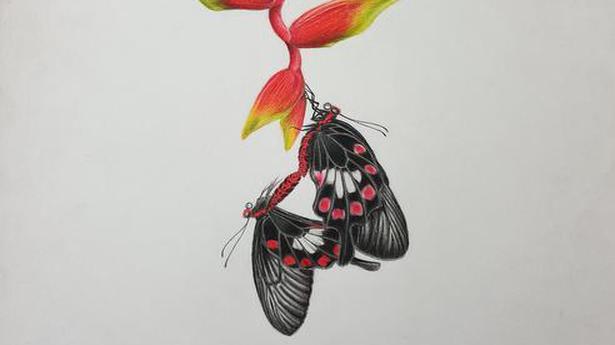 Two years ago, artist Lenin Dani Raj from Mettupalayam was on a nature walk through Kallar in Kerala when he heard a rustle. He watched as a black and white bird emerged from the canopy of trees. “It was huge and flew swiftly by. I heard its wings flap even from a distance,” he recollects. This was Lenin’s first sighting of the Great Indian Hornbill and this bird is now the favourite subject for his art. Lenin is a final year MSW student at PSG College of Arts and Science and has recently won the Artists for Wildlife and Nature Award in open category at an event held at Bengaluru. “My work features the mating of the Common Rose Butterfly on the tip of a Heliconia flower. This red and black butterfly can be easily spotted around Coimbatore. I chose Heliconia flower with similar shades to compliment it. My drawing was selected from more than 250 entries from around the country,” he says.

Lenin started off drawing cartoon characters. “It was after I volunteered with a local environmental NGO called Wildlife Wranglers that I developed an interest in Nature. One day I saw a photograph of a Scarlet Macaw on the internet. I loved its vibrant colours and tried to reproduce it. That was my first wildlife art.” Lenin showed the work to Jeshwin Kingsley, a conservationist and it was a turning point. “He encouraged me and gave me photographs of birds that he shot for me to practise my art,” he says. Getting the details right is the most important in wildlife art. “I read about the subject and discuss its characteristics with experts. I use more than one photograph as reference as the editing and lighting used in photography can alter the real colours of birds. I also go on nature walks to gain a first hand knowledge on different plants and animals,” he says. In 2019 Lenin reproduced photographs of Ward’s Trogon and Fire-tailed Sunbird shot by renowned wildlife photographer Jainy Maria Kuriakose. “She saw these works online and bought them immediately. They now decorate her living room.” Lenin included butterflies in his works recently. “I couldn’t find many wildlife artists who drew butterflies and so I took it up last year.”

More on the award

Lenin submitted 10 of his works in colour pencil for the award. “Seven of those were selected and displayed at an exhibition at Venkatappa Art Gallery in Bengaluru as a part of the competition. There, I met my favourite artist Paresh Churi and he shared a few of his techniques. I also got a chance to interact with visitors and get their feedback.”

Other than wildlife, he also does human portraits. “Most of them are commissioned works in colour pencil. It is my favourite medium as it helps me get even the minute details right,” he says. Lenin says that wildlife drawing has brought him closer to Nature. “Now I am keen to know about different species and more than ever I wish to work in Nature conservation.”

Who is the animal? – Times of India

Rajinikanth to feature in ‘Man vs Wild’ with Bear Grylls