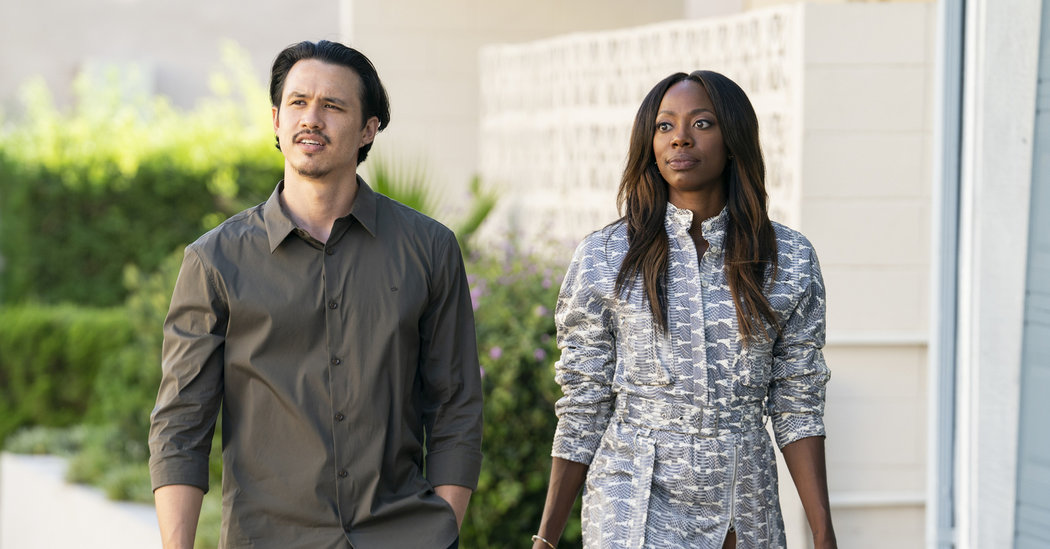 In a recent episode of HBO’s “Insecure,” Molly (Yvonne Orji), home for Thanksgiving and chatting about her dating life, shares a picture of her new beau, Andrew, from her phone. With slight glee in her eyes, Molly’s mother probes, “Oh, is he Korean?” Then her brother, asks, “Is he ‘Crazy and Rich’?,” referring to the hit movie from 2018.

It is striking that Molly, known for being overly picky and for struggling to find the right person, has chosen to date exclusively at all, much less with Andrew, an Asian-American music executive (Alexander Hodge) whom she and Issa (Issa Rae) had nicknamed “Asian Bae.” “Last season, Molly was very adamant about wanting to be with a black guy; that was her preference,” Orji said about her character. More surprising is that any conflict that we might expect because of their racial difference is basically nonexistent, often taking a back seat during the first half of the season to Molly’s anxieties about work and friendships.

“I think she finds herself this season taking it one date at a time and realizing he is pursuing her in a way that was different than what she was accustomed to or familiar with and even expanding her understanding of herself a little bit,” Orji said of Andrew. She went on, “In any relationship, regardless of race, that’s what you want.”

The Molly-Andrew relationship is part of a larger cultural trend in which black women, especially those of medium-to-dark-brown complexions — long positioned at the bottom of the aesthetic and social hierarchy in the United States because of racist standards — are increasingly appearing as leading ladies and romantic ideals in interracial relationships onscreen. In some cases, these are works created by black women themselves, like Rae’s “Insecure.”

In many ways, these romances push back against racial bias in the real world. In 2014, the online dating site OkCupid updated a study that found that of all the groups on its site, African-American women were considered less desirable than, and received significantly fewer matches than, women of other races. Later, Rae, in a chapter in her book, “The Misadventures of Awkward Black Girl” took that data head-on. “Black women and Asian men are at the bottom of the dating totem pole in the United States,” she wrote. She added, “If dating were an assortment of Halloween candy, black women and Asian men would be the Tootsie Roll and Candy Corn — the last to be eaten, even if at all.” Now Rae plays Leilani, who works in advertising and is dating a filmmaker (Kumail Nanjiani) in the comedic murder mystery “The Lovebirds,” out on Netflix on May 22.

These interracial stories are part of a broader mainstreaming of black women’s beauty and cultural influence. African-American women are romantically involved with white men in works as varied as Broadway’s “Slave Play” and “American Son”; the movie “Sonic the Hedgehog”; the lighthearted sitcoms “Bob Hearts Abishola” and “Mixed-ish”; the legal thriller “How to Get Away With Murder”; and the Netflix reality show “Love Is Blind.” Not to mention the many TV movies and documentaries about Meghan and Harry, the Duke and Duchess of Sussex. These works grapple with race in very different ways.

In “American Son,” which was adapted into a movie on Netflix, we meet an interracial couple so mired in grief when their son disappears in police custody that whatever intimacy they once shared becomes subsumed by the racial conflict they must confront.

Semi-recent Broadway productions of “Betrayal” and “Frankie and Johnny in the Clair de Lune” cast black actresses in lead roles traditionally performed by white women and tried to take a colorblind approach. “Sonic the Hedgehog” and“Bob Hearts Abishola” do not strongly center on race, choosing to let the mere pairing of a black woman and a white man do its symbolic work. In “Joker,” the fantasy of a black woman as the main love interest is partial cover for Arthur Fleck’s violence against the film’s black and Latinx characters.

When I was growing up, Tom and Helen Willis on “The Jeffersons” were my onscreen introduction to an interracial couple with a black woman and a white man. While their union, in part, reflected the 1967 landmark ruling Loving v. Virginia, in which the Supreme Court struck down laws banning interracial marriage, their pairing was also undermined by the comic relief they provided every time George Jefferson mocked them as “zebras.”

Last year, when ABC aired a live special reboot of “All in the Family” and “The Jeffersons,” it made perfect sense to have Kerry Washington play Helen. Not only did Washington add gravitas to the revival, but her casting was also a nod to her most famous and groundbreaking role, on “Scandal”: Olivia Pope, a D.C. fixer who is romantically involved with the president of the United States, Fitz Grant (Tony Goldwyn), who is white. Through Pope, Shonda Rhimes’s hit series made history, with the first African-American female lead in a network drama in almost 40 years. The passionate rendering of that couple recognized racial difference only to transcend it. In the final seasons, Fitz was so in love with Olivia that he sacrificed his marriage and took the country to the brink of war to rescue her when she was kidnapped.

In an interview with Washington last fall, I asked her about her role in helping change perceptions of interracial relationships. “I immediately jump to Sally Hemings and Thomas Jefferson as the earliest cultural framework for how we think about interracial relationships,” she said. “That’s been painted as a relationship despite the fact that she was his property. So it wasn’t completely of her free will.”

After noting that historically, the mere hint of the inverse — a black man with a white woman — could once lead to his lynching, Washington said, “I do think the ways that we are thinking about interracial relationships now, it’s about two consenting individuals’ choosing.” She went on, “We’re in a moment of being able to really deal with the complicated nuance of two individuals coming together across cultural divides and choosing each other, both having free will.”

Such choices, as “Slave Play” stressed, will have to reckon with the sin of slavery, in which masters exploited the bodies of enslaved black women as a matter of profit and sexual power. Jeremy O. Harris, the playwright, emphasized that control and coercion are inescapable in interracial relationships. Those themes were tapped in a recent episode of the CBS All Access legal drama “The Good Fight,” which focused on a hit play (with an unprintable name) that read like a satire of “Slave Play.” In one scene, Caleb (Hugh Dancy), a white junior associate at a law firm, and his boss, Liz (Audra McDonald), a black partner there, read an erotic excerpt from the play aloud as they prepare for a deposition, and the heightened sexual tension of the script forces them to acknowledge their own mutual attraction.

“He seems to think all interracial relationships are about power,” Liz says of the playwright. Then, after she and Caleb each reveal that they have never dated outside their race, she jokes, “We’re both just racists.” To which Caleb flirtatiously replies, “I think it’s probably a lack of opportunity.”

On the Netflix reality show “Love Is Blind,” a new couple — Lauren, who is black, and Cameron, who is white — wrestle with this racial history right before our eyes as they move from 10 days of speed-dating — in which they never see each other — to engagement and a wedding ceremony.

Audiences were swept up in their romance because they were relatable and authentic, and they didn’t pretend that race doesn’t matter. Their racial differences are a reality that Lauren, her family and Cameron choose to confront together, and then embrace as part of the whirlwind courtship.

Ultimately, none of these interracial narratives can make up for our country’s violent racial past or the way that history continues to plague us. The trend remains mostly symbolic, with black women still on the lowest rung of the socio-economic ladder. Every once in a while, however, these fictionalized romances and reality show couples give us something to cheer for: a happily ever after in which the male partner acknowledges and begins to unravel his own racial privilege, not just out of love, but because it is the right thing to do.