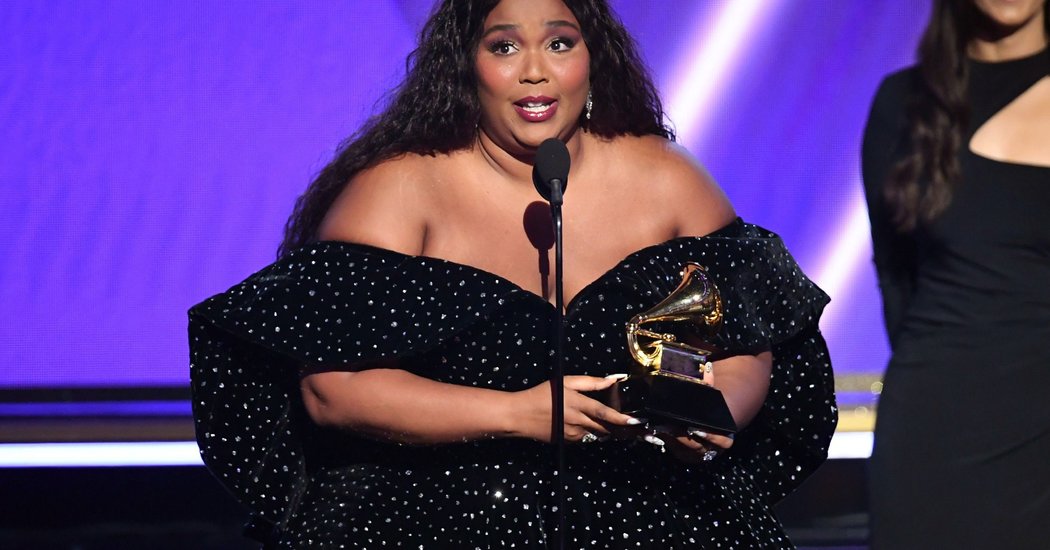 Lizzo opens the show, declaring, ‘Tonight is for Kobe.’

LOS ANGELES — Lizzo and Alicia Keys set the tone of the 62nd annual Grammy Awards right from the start on Sunday night as both mournful and celebratory.

Lizzo announced, “Tonight is for Kobe,” and went straight into a bold, full-throated medley of her songs “Cuz I Love You” and “Truth Hurts,” backed up by a mini orchestra and surrounded by ballerinas with otherworldly lights in their tutus.

Keys, the host for the night, followed her by walking solemnly to the center stage and saying softy, “Here we are together, on music’s biggest night, celebrating the artists that do it best, but to be honest with you we’re all feeling crazy sadness right now.”

“We’re literally standing here heartbroken in the house that Kobe Bryant built,” Keys went on to say, a reference to Staples Center, the arena where Bryant, who died at 41 in a helicopter crash on Sunday, played for much of his N.B.A. career.

She then invited members of the group Boyz II Men to the stage and sang part of their elegiac song “It’s So Hard to Say Goodbye to Yesterday” with them.

Well before Bryant’s death, a degree of anxiety had hung over the Grammys, following the recent removal of the head of the Recording Academy, the organization behind the awards — a clash that brought out accusations of vote-rigging and sexual harassment and criticisms of not enough progress on the academy’s stated goals of becoming more diverse and inclusive.

Keys seemed to obliquely allude to those issues — and more — in a speech and piano medley in which she played with the lyrics to Lewis Capaldi’s ballad “Someone You Loved” (a nominee for song of the year). “It’s been a hell of a week, damn,” she said, as she twinkled chords on the piano. “This is a serious one. Real talk — there’s a lot going on.”

She added, “It’s time for newness. We refuse the negative energy, we refuse the old systems.” She also took aim at President Trump, saying he should be replaced by the Bronx singer-rapper Cardi B.

Hours before the show, the news of Bryant’s death led to gasps in the press room. The Grammys take place at the Staples Center, where championship banners Bryant helped the Los Angeles Lakers win hang from the building’s rafters, along with his jerseys.

“In Staples Arena, where Kobe created so many memories for all of us, preparing to pay tribute to another brilliant man we lost too soon, Nipsey Hussle,” John Legend wrote on Twitter. “Life can be so brutal and senseless sometimes.”

Flags outside the arena were lowered to half-staff as preparations for the event continued, and lights shined on Bryant’s jerseys inside. Harvey Mason Jr., the chairman and interim chief of the Recording Academy, called for a moment of silence.

“Since we are in his house, I would ask you to join me in a moment of silence,” Mason said, The Associated Press reported.

All but nine of the Grammys’ 84 awards were given out before the television broadcast, in a separate “premiere” ceremony that was plagued by celebrity absences — but also featured non-stars celebrating how a Grammy win can be a career-defining moment.

The early ceremony featured some landmarks. Gloria Gaynor, the disco diva who won in 1980 for her anthem “I Will Survive,” took home her first award since then — best roots gospel album, for “Testimony.” Tracy Young became the first woman to win the best remixed recording category for a version of Madonna’s “I Rise.” “We’ve shattered the glass ceiling together,” Young said when accepting the award. “I proudly accept this on behalf of all female producers who have been overlooked.”

Tanya Tucker, the 61-year-old country singer, won the first Grammys of her career, taking best country album for “While I’m Livin’,” her first release in a decade, and best country song for “Bring My Flowers Now.”

Nipsey Hussle, the rapper who died last March at 33, won his first Grammy for “Racks in the Middle,” which took best rap performance. Family members spoke, including his grandmother, who said: “I wanted to thank all of you for showing all the love that I have felt for him all of his life and will always live in my heart. So thank you, thank you, thank you.” Hussle is to be celebrated during the telecast in a performance segment scheduled to include Kirk Franklin, DJ Khaled, John Legend, Meek Mill, Roddy Ricch and YG.

Beyond the Grammy glitz, a battle is raging behind the scenes.

This year’s event, featuring a fresh crop of stars like Lizzo, Billie Eilish, Lil Nas X and Ariana Grande competing for the top awards., was supposed to represent “a new era for the Recording Academy,” one that would be more attuned to pop’s current pulse after years of bruising criticism over the Grammys’ poor record in recognizing women and artists of color in the major categories.

That “new era” statement was made just two months ago, when nominations were announced, by Deborah Dugan, the academy’s new chief executive. She had been telegraphed as the bold new leader the Grammys needed, and came armed with an unsparing critique of the academy’s record on diversity by Michelle Obama’s former chief of staff, the Time’s Up leader Tina Tchen.

But just 10 days ago, Dugan was removed from her position, stunning the industry and plunging the normally cheery pre-Grammys week into mudslinging and chaos that has threatened to overshadow the event itself.

Dugan claimed in a 44-page complaint to the Equal Employment Opportunity Commission that she had been retaliated against for uncovering misconduct including sexual harassment, vote rigging and rampant conflicts of interest. The academy, in turn, said that an assistant had complained about a toxic and bullying work environment, and that Dugan had demanded a $22 million payoff to leave quietly, a charge Dugan has denied.

Before the comments from Keys at the start of the show, one of the few public comments from a major industry figure came Saturday night from the hip-hop mogul Diddy.

Accepting an award at Clive Davis’s glamorous annual pre-Grammys party, Diddy avoided mentioning Dugan by name but criticized the academy for its failure to recognize hip-hop artists of color in the top categories. Over the last decade, for example, just one nonwhite artist — Bruno Mars — has won album of the year.

For music fans, the Grammys are a television show about splashy performances and, oh yes, a handful of awards scattered across three and a half hours. There may be no mention at all of the academy’s behind-the-scenes crisis.

The biggest contests this year feature some of pop’s most dynamic young faces, many of whom went from obscurity to mega-stardom over the past year.

Lizzo, a charismatic and outspoken pop and R&B singer who has fascinated fans and critics alike, is this year’s most nominated artist, with eight nods. She and the 18-year-old alternative dynamo Billie Eilish, who has a total of six nominations, are each up in all four top categories — album, record and song of the year and best new artist.

Lil Nas X, the internet meme virtuoso whose “country-trap” hybrid “Old Town Road” became a cultural phenomenon last year, is also up for six awards, including record and album of the year, and best new artist. If he wins big, it could be a statement by the academy’s voters that they want to shed their conservative reputation and fully embrace the most up-to-the-minute trends. That does not seem super likely.

Other big contenders include Ariana Grande, Lana Del Rey, Bon Iver and Vampire Weekend. Taylor Swift is up for just one major award: song of the year for “Lover.”

Big names will perform, but Taylor Swift is no longer one of them.

At the music industry’s schmoozy pre-Grammy parties last week in Los Angeles, the insider chatter has all been about Dugan versus the academy. But, for the most part, the events have been business as usual. Few people expect the show to be affected.

Still, a top musician signaling a position on Dugan’s claims could change the conversation entirely. Label executives and publicists have been wringing their hands over what their artists might be asked — and what they might say — on the red carpet or onstage.

And while the lineup of performers appears to be steady, the industry was riveted on Friday with reports that Swift would not appear. But why? Was Swift — always an outspoken backer of women — dropping out in protest, or was she simply unprepared or uninterested? Everyone, including fans and the most powerful people in music, was left to guess.

Tyler, the Creator’s two-song segment began with Boyz II Men and the R&B singer Charlie Wilson harmonizing to Tyler’s song “Earfquake,” done as an old-fashioned doo-wop set piece, complete with the singers surrounding a burning barrel. For “New Magic Wand,” Tyler shifted into a surrealistic scene in which a troupe of dancers — all dressed like him, in asymmetric suits and platinum pageboy wigs — walked to the stage and moshed violently as Tyler screamed with distortion, a set of picturesque homes burning down behind him.

The producer who shaped 40 years of Grammy shows says farewell.

This year’s show will be the last for Ken Ehrlich, who has produced the Grammys telecast since 1980 and is largely responsible for the show’s signature presentation style — the “Grammy moments” strategy of pairing artists together for special appearances, going back to Neil Diamond and Barbra Streisand doing “You Don’t Bring Me Flowers” 40 years ago.

Ehrlich has lived — and scrambled — through some of the Grammys’ most bizarre moments, like the “soy bomb” dancer crashing Bob Dylan’s performance in 1998. He has also frequently been the target of criticism that the show is out of touch and too often favors late-career stars at the expense of younger faces and more current nominees. Exhibit A: the 2018 show’s preponderance of Sting and absence of Lorde, who had been up for album of the year.

Ehrlich has always said that his mandate is to put on a varied and imaginative show, not simply to parade the current nominees. Viewers may consider that this year when he presents his swan song, a recreation of the ensemble performance of “I Sing the Body Electric” from the 1980 film “Fame,” featuring performances by Joshua Bell, Camila Cabello, Gary Clark Jr., Common, Misty Copeland, Lang Lang, Cyndi Lauper, John Legend and others.

Russia and China vetoed a last-ditch attempt on Friday by Western members of the U.N. Security Council to extend approval

Long-Planned and Bigger Than Thought: Strike on Iran’s Nuclear Program